I am a huge Indian cricket fan, but I must admit that I was very happy to see England win their very first World Cup in the summer of 2019. Without the English, we wouldn’t have this beautiful game, so I enjoy seeing them do well. Also, the final is one that will last long in the memory. The Format of the Tournament

This was the twelfth edition of the Cricket World Cup and it took place in England and Wales from the 30th May to the 14th July. Ten teams competed in this tournament and they were England, Australia, Pakistan, India, South Africa, New Zealand, Bangladesh, Sri Lanka, Afghanistan, and the West Indies.

These Were Some of the Best Matches in the Group Stage

England v South Africa: This was the opening match of the tournament and those in attendance at The Oval, London, were treated to the Ben Stokes and Jofra Archer show. England batted first in this match and scored 311 thanks to an 89 from Stokes and half-centuries from Jason Roy, Joe Root, and Eoin Morgan. Archer was drafted into the team at the start of the tournament and he immediately showed why. He bowled with pace and aggression and picked up three wickets for 27 runs from the 7 overs that he bowled. However, those who watched this match will remember it for the sensational one-handed catch by Stokes.

Pakistan v West Indies: There is nothing quite like watching West Indian bowlers tear through a batting lineup. Pakistan batted first and West Indies blew them away for a paltry 105 all out. Oshane Thomas bowled with aggression and skill and picked up 4 wickets for 27 runs. Andre Russel could only bowl three overs because of his knee, but he still managed to collect two wickets for 4 runs. The West Indies chased their total down with ease, needing just 13.4 overs. This thrashing would come back to haunt the Pakistan team as the missed out on a semi-final spot to New Zealand thanks to their inferior net run rate.

England v Afghansitan: The draw of ODI cricket is being able to watch batsman dispatch bowlers into the stand, and there were plenty of sixes in this match for the crowd to enjoy. England batted first and belted their way to a whopping 397, thanks to Eoin Morgan’s 148 from 71 balls. He smacked a total of 17 sixes in his innings to break the record for most sixes scored by a batsman in an ODI match. Rashid Khan had a bit of a mare as he conceded 110 runs and picked up no wickets. In reply, Afghanistan could only muster 247, with Archer picking up another 3 wickets. Overall, there were 33 sixes in the match.

India v New ZealandAs an India, it is hard to relive this match, but fair play to New Zealand. The Kiwis batted first on a sticky wicket and managed to score 239 runs (the reserve day was used) from their 50 overs. Not many gave New Zealand a chance of defending this, but Matt Henry and Trent Boult reduced India to 5⁄3. MS Dhoni and Ravi Jadeja looked like they were taking India towards victory, but when they were out there was too much for the tailenders to do.

England v Australia: Australians will find it equally hard to remember this match as they were comprehensively beaten by England. The Aussies batted first and were reduced to 14⁄3, something that they never recovered from. Steve Smith helped them to get up to 223, but it was never going to be enough against the England batting lineup. England chased it down for the loss of just two wickets and with 17.5 overs left. A true thrashing.

The Most Memorable World Cup Final

Those who watched this final, whether at Lord’s or on the television, will never forget the events that unfolded in this match.

New Zealand opted to bat first and managed to score 241 from their allotted 50 overs. Liam Plunkett and Chris Woakes picked up three wickets apiece. In reply, the New Zealand bowlers bowled with precision, taking wickets at regular intervals. However, a century stand between Jos Buttler and Stokes (who else), steadied the ship. By the time the final over was upon us, England needed 15 runs. This is when the drama unfolded. 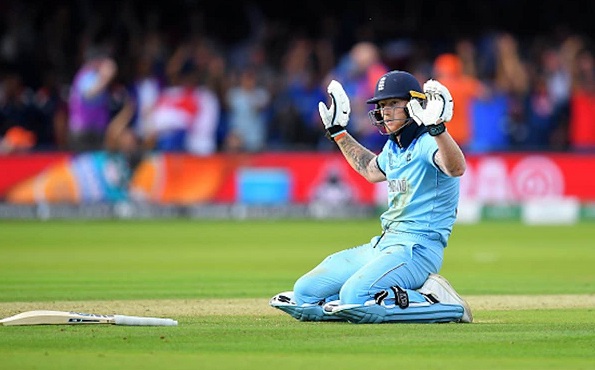 The first two balls were dots, meaning England now needed 15 runs from 4 balls. Stokes made that 9 from 3 when he deposited the third ball into the stands. Stokes hit the fourth ball into the deep and ran hard for two. On the way back, the ball struck his bat and deflected to the boundary. Six runs were awarded, meaning England needed 3 runs from 2 balls. They only managed 2, and the match was tied.

A Super Over was played to decide who would lift the trophy. Stokes and Buttler batted for England they scored 15 runs from their 6 balls. James Neesham and Martin Guptil batted for New Zealand. They needed 2 off the final ball to win, but they only managed one as Guptil was run out by mere inches. Unbelievably, the Super Over was also tied, meaning England were crown champions as they scored more boundaries.