The 1999 Cricket World Cup will be forever remembered for one thing. No, not a heroic batting performance, such as Vivian Richard’s in 1979 to help the West Indies claim the trophy, or an outstanding spell of fast bowling that absolutely decimated a side. It will be remembered for the moment South Africa decided to throw it all away with a suicidal run. 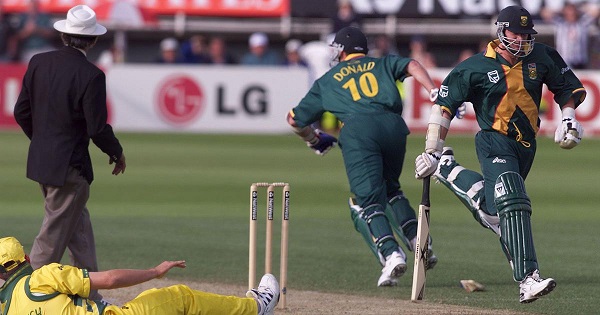 This was the seventh edition of this tournament and it was mostly hosted by England. I say mostly because some of the matches were held in Ireland, Wales, Scotland, and the Netherlands.

This meant that the semi-finals were Pakistan v New Zealand and Australia v South Africa.

Pakistan played against New Zealand on the 16th June at Old Trafford, Manchester, and they probably never expected such an easy match. New Zealand batted first in the match and managed 241 runs from their allotted 50 overs. Shoaib Akhtar was the pick of the Indian bowlers as he picked up 3⁄55 from his ten overs. In reply, Saeed Anwar scored 113* and Wajahatullah Wasti 84 as Pakistan chased down New Zealand’s target with 15 balls and 9 wickets to spare. The Second Semi-Final and the Moment of Madness

South Africa played against Australia on the 17th June at Edgbaston, Birmingham, and nobody watching would have expected such a finish to the match. Australia batted first in the game and they were bowled out 213 runs with 4 balls remaining. Michael Bevan top scored for the Aussies with 65, while Shaun Pollock was the standout South Africa bowler with 5 wickets for 36 runs.

When South Africa were batting, they kept losing wickets at regular intervals, but with three balls remaining they needed just 1 run. Australia probably thought that their tournament was over, despite the fact that South Africa only had one wicket left. South Africa were probably extremely confident that they would win, but then a moment of complete madness happened. Lance Klusener went for a suicidal single, but Allan Donald, rightfully so, was hesitant. Both batsmen ended up at the same end of the pitch and Gilchrist completed an easy run out. The match finished as a tie, but Australia went through as they did better in the Super Six Stage.

Australia would go on to thrash Pakistan by 8 wickets in the final. I hope they bought Klusener and Donald a beer after they lifted the trophy.